Sauger on the Brink in Lake Winnipeg – Past Lessons Ignored 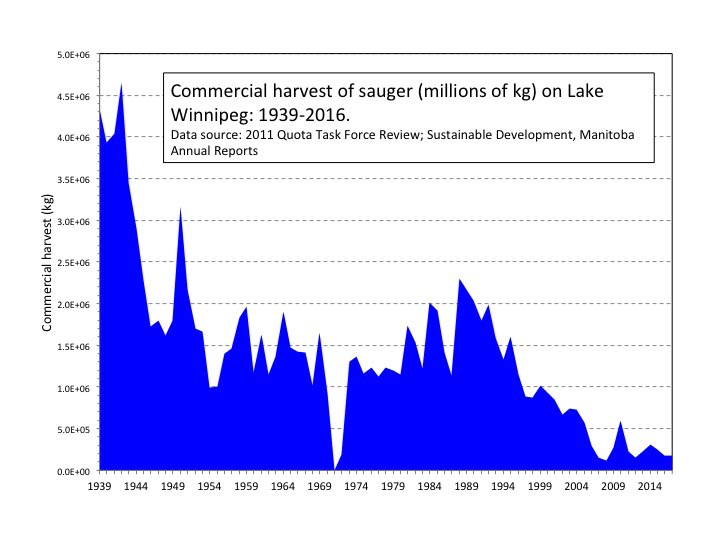 While much focus has been placed on the plight of walleye in Lake Winnipeg (and rightly so), sauger, another commercially and recreationally important species has very quietly almost slipped into oblivion from this great lake.  How is it that this was not on anyone’s radar?  It is not like the warning signs were not there.  It is not like we did not have lessons available to us that we should have learned from what has occurred in other commercially-fished lakes (even in our own backyard in Manitoba). Yet today, the commercial catch of sauger is only about 175,000 kg.  The average commercial harvest of sauger in Lake Winnipeg in the 1980s was 1.75 million kg annually.  Back before the WWII, the commercial harvest exceeded 4 million kg.  For many years, sauger harvest exceeded that of walleye and whitefish. That has dramatically changed though.  The sauger catch has dropped by about 96%, indicative of a species that is pretty much commercially extinct now.  Technically speaking, the species is not extinct as there are still some sauger still in the lake.  Biologically, however, they don’t play an important ecological role now. Sauger face imminent extirpation from the lake.

Sauger probably don’t care what term we use to describe their current status.

Everyone Should Have Seen This Coming

The lessons that we should have heeded have been in front of us anglers, commercial fishers and government for decades. There are just too many examples to ignore, but somehow we managed to turn a blind eye. Sauger became commercially extinct in

The Manitoba Wildlife Federation is preparing a submission to the Committee on the Status of Endangered Wildlife in Canada (COSEWIC), the body that evaluates the status populations of wildlife in Canada and then makes recommendations to the federal government to list a species (or population of a species) as Special Concern, Threatened, Extirpated or Extinct under the federal Species at Risk Act.  There are provisions in the Act for emergency listings and for the immediate formation of a recovery team and recovery plan.  We believe that the near elimination of sauger from Lake Winnipeg should warrant such a listing.

Please join us and the many other concerned anglers at the Manitoba Legislature on October 23, 2018 (at noon) to

There is one management action that the government can take immediately to save the sauger (and which will also significantly help walleye too) – the government must increase the minimum mesh size being used on the lake.  This needs to be implemented prior to the next commercial fishing season. The sauger can’t wait.  Nor can walleye.  Insist that our government put the needs of our fish resources first. In the long run, the fishery and our economy will be much more sustainable. The consequences of our collective inaction are already playing out on the lake and this does not bode well for fish, angling, the commercial fishery, jobs and the economy.