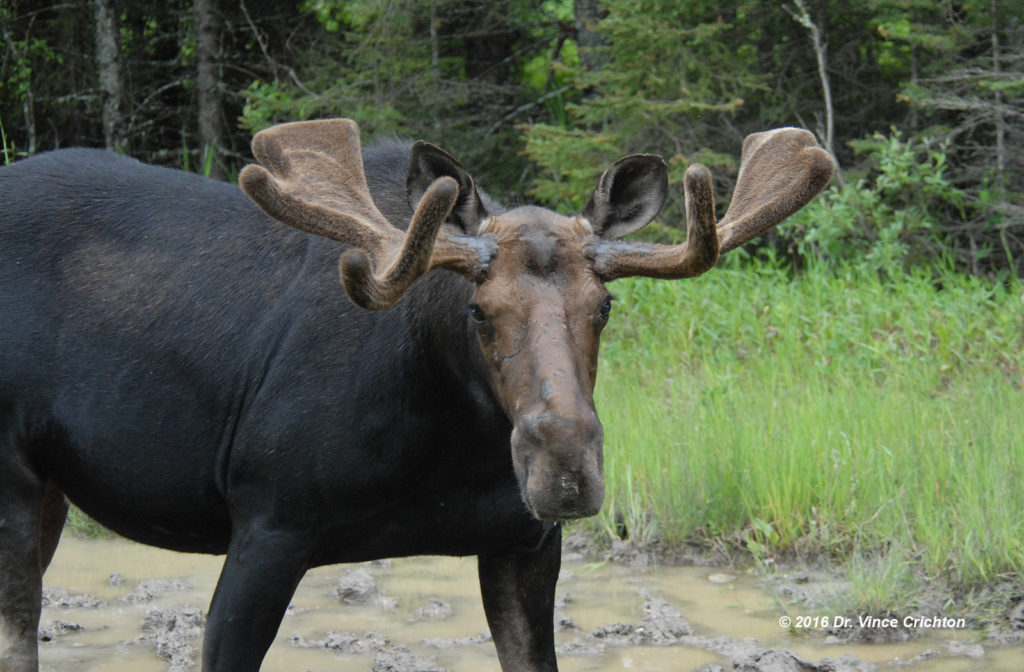 Sustainable Big Game Populations and Safety for All Manitobans

Big game hunting in Manitoba is in crisis. Populations of moose, elk and caribou are under siege, and to make matters worse, the safety of big game hunters and rural Manitobans is at risk. The Manitoba Wildlife Federation (MWF) is taking a leadership role in responding to this crisis, striking an oversight committee of experts and establishing specific objectives for its campaign. The MWF’s immediate priority is to bring an end to the practice of spotlighting, which is unacceptable on grounds of both public safety and conservation.

Big game hunting in Manitoba is at a crossroads.  An overview of our treasured populations of moose, elk and caribou reveals that they are all under severe pressure:

Reasons for all of these declines are complex and multifaceted. Disease, predation, and severe winters have likely all taken a toll. However, there is little doubt among wildlife professionals, enforcement field staff, hunters, farmers and trappers that the key issue is overharvest. Moreover, harvest is one factor that we can manage.

How did we get here?

The story of Manitoba’s big game crisis is complex. One of the key themes is a lack of sufficient data on big game populations to create effective management plans. In short, Province’s Wildlife Branch budget for big game surveys has been too low for too long. If you don’t know how many big game animals you have in any given area how can you manage effectively?

Information on harvest rates of big game has also been lacking, primarily because of the three groups of harvesters, only licensed hunters are required to report harvest. The other two, First Nations and Métis, are not required to report harvest and no meaningful effort currently exists to extract voluntary information from these groups. As a result there is no good estimate of harvest. This cripples wildlife manager’s ability to have any chance of effectively managing moose, elk, deer and caribou.

We believe a general lack of resources for wildlife enforcement is also a major problem. In conversations with Conservation Officers (COs) in the field, it appears that funding for officer staffing levels field enforcement is at an all-time low. For example, funding for night surveillance flights to combat illegal spotlighting activities and to deploy mechanical big game decoys has been reduced.

Making the lives of Conservation Officers even more challenging is ambiguous enforcement policy. While the Manitoba Hunting Guide states that “Status Indians may not discharge a rifle or shotgun where it is dangerous to do so”, current enforcement policy does not treat spotlighting by status Indians as inherently unsafe, even in regions with widespread roads and human inhabitation. COs are operating under instructions that they cannot lay charges unless a status Indian is caught spotlighting on private land without permission. This creates an open season for spotlighting in Manitoba.

The Elephant in the Room

A simple truth in big game management is emerging in Manitoba: without significant engagement and policy change by the Province when it comes to First Nations and Métis hunters, it will be impossible to effectively and sustainably manage big game populations.

This seems a daunting task but experiences elsewhere show it is possible. For example, government officials in Manitoba have told us to date that due to Court decisions in Canada, it was not possible to ban spotlighting. But in Saskatchewan, in spite of various legal decisions governing spotlighting by First Nations hunters across Canada, spotlighting was in fact banned through an extensive and proactive engagement process with First Nations, led by the Chief of Enforcement for Saskatchewan. We need a similar effort here. And the MWF needs to help make it happen.

Crisis brings opportunity. We have heard some hunters and MWF members express feelings such as “you’ll never change these things, they’ve been broken for a long time, forget it”. While this sentiment is understandable, there is reason to believe change may be possible.

Sometimes, you need a crisis to create the impetus for change. We have a crisis now and in that lies opportunity. With areas being closed to hunting for all parties, it brings focus to the problem, including media attention.

A crisis can have the effect of pulling people together. We see our MWF Clubs coming together to support our big game campaign. And this crisis and campaign is already bringing new supporters to the table. There is strength in numbers and reasons for renewed hope.

To guide our response to this crisis, the MWF Executive established a Big game Crisis Committee, drawing heavily on the leadership within our Club network and supplementing it with external experts in biology, law, policy and resource management. The charge given to the Committee is reflected in the following mission, objectives, and key concepts.

Through whatever actions are required, ensure the recovery and maintenance of sustainable big game populations for the use and enjoyment of all Manitobans, and to create a safe hunting experience, while protecting the public’s personal safety and property.

Key Principles – Together we stand, divided we fall.

The most important role for the MWF is to provide leadership to unite Manitoba hunters on critical issues for the future of hunting. Bringing together the over 100 member Clubs, other interested groups, aboriginal communities and the outdoor industry is the only way to create the collective voice and strength to bring policy change. Small groups of hunters complaining around campfires does not create change, but a coalition of thousands just might.

The hunting rights of aboriginals are constitutionally protected and are only superseded by the need for conservation of game species and for human safety. We have approximately 80,000 Métis people in Manitoba with new and unregulated rights to hunt big game. We have thousands of First Nations hunters across Manitoba with unregulated rights to hunt big game. Aboriginal populations are growing at a rate 3-4 times faster than any other ethnic group in Canada. We cannot secure the future of big game without the help and engagement of aboriginal hunters.

As licensed hunters we must maintain a deep and ongoing respect for these constitutional rights. The flip-side is that we also have to maintain our principles and speak the truth. This process will be challenging and at times frustrating. But as Saskatchewan has shown it can be done. This must be a grassroots movement to work – hunter to hunter.

To achieve these objectives, the Committee has identified an initial phase of work consisting of the following components:

Conduct an initial review of existing data in Manitoba for big game populations, including, but not limited to, survey data from the provincial Wildlife Branch. Ongoing engagement by the Committee with the Wildlife Branch encouraging innovation towards big game surveys will be a focus. This work has begun and will be ongoing.

Legal Review. Commission a review of the legal history and basis for constitutionally protected hunting rights.

Community Outreach Plan. Create a dialogue with elders and hunters in key First Nations and Métis communities in Manitoba. This could create the impetus for the Province to build a much needed management structure for aboriginal subsistence hunting rights. Initial outreach to some First Nations and Métis communities is very encouraging. Simultaneously, outreach to the licensed hunting community in Manitoba is essential to rally support for the campaign, gather information on the state of big game populations and provide guidance as to the direction of the campaign.

Education and Advocacy Strategy. The MWF ran a very successful education campaign prior to the 2016 Manitoba election. The new government adopted many of our big game campaign’s key recommendations as evidenced by the mandate of the new Sustainable Development Minister, including commitments to eliminate spotlighting, improve big game surveys, and the creation of co-management agreements with aboriginal hunters. The MWF will now continue to work with the government, licensed hunters and aboriginal people to see that our vision for big game management is delivered.

Moose, elk, deer and caribou cannot speak for themselves. They provide nourishment to our families, indelible memories and they are the key to the outdoor lifestyles that define who we are. As hunters, it’s our obligation to be the voice for the animals we hunt. It’s time to roll up our sleeves and set things right for our big game so future generations will have the same hunting opportunities that we’ve all enjoyed.