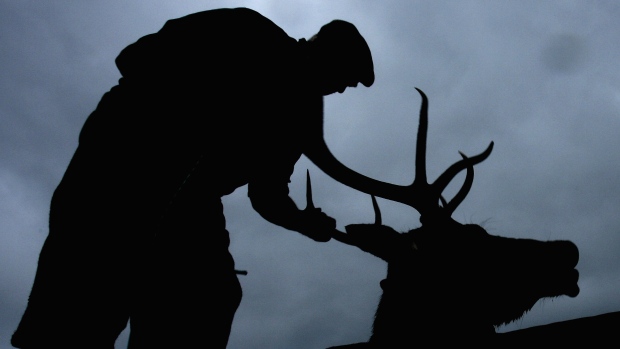 Seven people have been arrested in two cases of illegal night hunting in western Manitoba.

Social media posts about big game animals killed in that area of the province this fall prompted conservation officers to conduct patrols in the region, says a news release from the Manitoba government.

A ground patrol was organized on Dec. 9 after the remains of two illegally killed elk were found south of Shilo. Conservation officers from several detachments in southwestern Manitoba took part and around 11:15 p.m., a vehicle was seen approaching the area.

Soon after, a spotlight “consistent with night lighting” was seen, the release states. The vehicle was on a dead-end road and officers blocked it in.

Three men were arrested and their vehicle, a 2002 Ford F-150, was seized. Three rifles, a spotlight and other hunting gear was also taken.

Then on Dec. 11, a night patrol involving conservation officers, a canine unit, a municipal police officer and spotters in an aircraft was organized.

Early on the morning of Dec. 12, officers in the aircraft noticed a vehicle northwest of Glenboro using a spotlight. Ground patrol units were directed to the area but when officers signalled for the driver of the vehicle to stop, it sped off.

Officers in the aircraft kept an eye on the vehicle and directed ground units, and the driver of the suspect vehicle lost control around a curve in the road and drove into a snow-packed ditch.

Four men were arrested and a 1995 GMC truck was seized. Conservation officers also took two rifles and other hunting gear, a spotlight, one freshly killed deer and a set of illegal brass knuckles.

Archie McPherson, the reeve of the Rural Municipality of Pipestone, said night hunting and spotlighting are both issues right across southwestern Manitoba.

“Everybody is concerned … for their own safety,” he said. “[I’ve heard] reports from various rural residents waking up thorough the night or early in the morning and hearing gunshots going off.”

In spotlighting, a hunter shines a powerful and focused artificial light into the eyes of animals such as moose, elk and deer, causing the prey to stop moving and therefore making it easier for them to be killed.

“Wildlife don’t have much chance when there’s a spotlight put on them in the dark,” he added.

“I applaud the conservation officers for doing their job and apprehending these subjects,” said McPherson. “The people that are doing it are certainly aware that it’s illegal and it’s dangerous so enforcement and stiffer penalties [are] certainly a must.”

The investigations into both cases are ongoing and charges are expected to be laid at a later date.