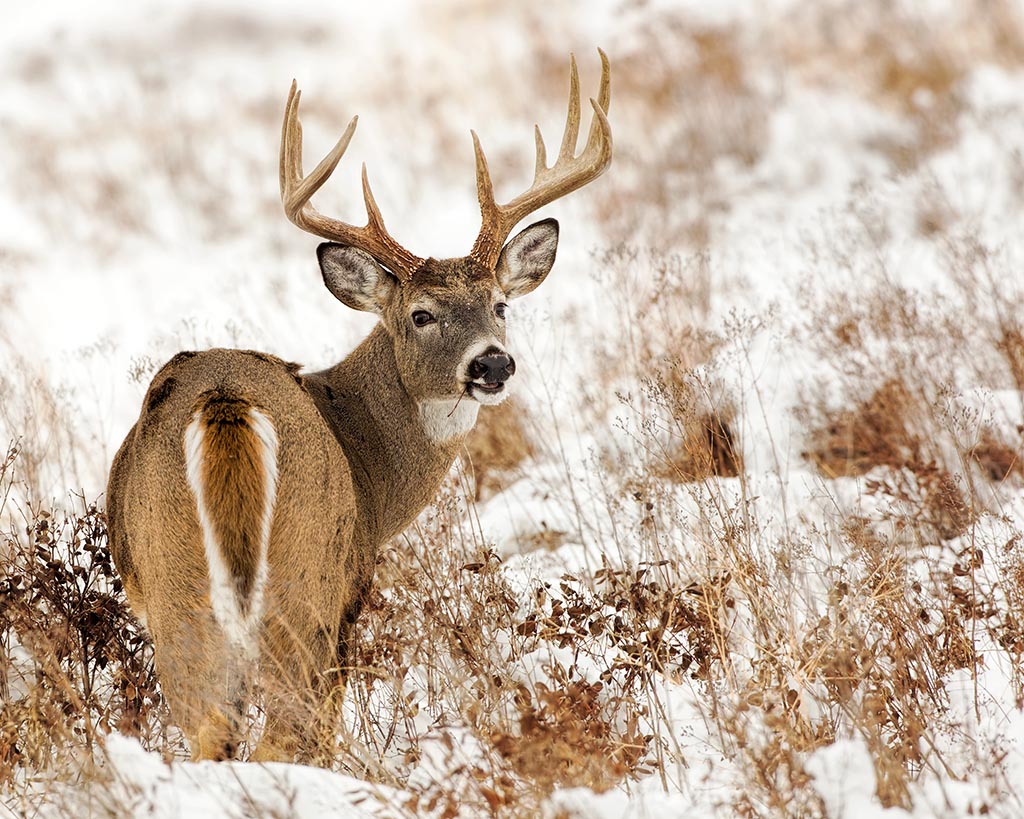 In collaboration with Manitoba Sustainable Development, the MWF is in the process of developing an informational brochure on Chronic Wasting Disease (CWD). We hope to have the printed brochure available to our members and affiliate clubs as well as on Social media in the next month or so. However, we also feel it is important to provide you with the information and knowledge as soon as possible.

IMPORTANT ANNOUNCEMENT – If your MWF Affiliate Club hosts a head night, please also read further for your opportunity to have Sustainable Development attend and collect lymph node samples from your big game heads right at your event. Sampling only takes a few minutes and your participation could mean the addition of hundreds of samples for our efforts in monitoring for CWD in Manitoba. The lymph node sampling will not affect the outer appearance of the head. If your animal comes from one of the mandatory sampling areas, this will make it even easier for you to provide your sample, as you will get your big game head back immediately.

WHAT IS CHRONIC WASTING DISEASE?

Chronic Wasting Disease (CWD) is a progressive neurological disease that occurs in members of the cervid family (deer, elk, moose and caribou/reindeer). Over time, CWD causes degeneration of the brain. The disease is similar to Bovine Spongiform Encephalopathy (BSE), also know as Mad Cow Disease. Unlike other wildlife diseases, the infectious agent in CWD is not caused by a virus, bacterium or parasite. It is caused by a type of protein called a prion. CWD is always fatal in cervids. There is no vaccine to prevent it. There is no cure. CWD has the potential to severely reduce or even wipe out local populations of cervids.

ORIGINS AND SPREAD OF CWD

CWD is a relatively new wildlife disease and is thought to have originated at a research facility in Colorado in the 1960s. While not proven, it is believed that CWD may have originated as scrapie, a disease of sheep, that mutated and infected captive mule deer at the facility. CWD is highly contagious. It is easily spread through the saliva, blood, urine and feces of infected animals, and once in the environment, can contaminate soils for years and be taken up by vegetation. While not affected by CWD, scavengers and predators such as crows, ravens and coyotes can ingest the prions by feeding on infected animal carcasses, and spread the disease to new areas.

Despite efforts of state, provincial and federal governments to eradicate the disease, CWD continues to spread and is now found in more than 25 states and 3 provinces, as well as other countries. Once present in wild populations of cervids, it is has proven difficult to stop its spread. Testing of deer and elk in Manitoba over the last several decades has shown that CWD is not present in Manitoba. However, CWD has been detected in wild deer and elk in Saskatchewan, sometimes within only a few kilometres of our shared provincial border.

HOW TO RECOGNIZE CWD IN WILDLIFE

It is important to know that CWD is a progressive disease and the recognizable symptoms outlined below may take several years to show up in an infected animal. Younger infected animals may not show any symptom but may nevertheless be carrying the disease. The only way to be sure your animal is not infected is to have it tested.

If you observe cervids displaying any of the above symptoms, make note of the animal’s location and report the occurrence to the nearest Sustainable Development office.

According to the World Health Organization (WHO), there is no direct evidence that CWD has infected people. However, current medical research using macaque monkeys (a species used in research trials to understand how disease may affect humans) suggests that a high level of caution is warranted. As a result, the WHO recommends that all products, including venison, from animals known to be infected with a prion disease (including CWD) should not be consumed. For hunters, this means taking precautions in the field and having your animal tested before consuming it.

There are many precautions that hunters can take – before your shot, while field dressing your animal, and when deboning or taking your cuts to a butcher. Some of the precautions might be considered an inconvenience to hunters, but will help prevent the spread of CWD. Hunters are an important key to preventing CWD spread.

Before the Shot
• Never shoot an animal that looks sick, especially one that is displaying the signs of CWD. Report it to your nearest Sustainable Development office. If you do accidentally shoot a sick-looking animal, attach your game tag, DO NOT field dress the animal but leave it in place to avoid spreading any disease and report it immediately to your nearest Sustainable Development office. They will replace your hunting tag for free.

Field Dressing
• Always wear latex or rubber gloves
• Consider using disposable knives
• Minimize handling the brain, eyes and spinal tissue, as this where the highest concentration of CWD prions would be (if present)
• Do not cut/saw through the spine, unless you are saving the head (for a mount, CWD testing, evidence of gender, to take to a head night, etc.). If you intend to take the head separately from the rest of the body, make this your last cut and immediately place the head in a bag
• Even in Game Hunting Areas where testing for CWD is not mandatory, consider saving the head and submit it for CWD testing (see Testing and Monitoring section)
• Consider quartering your animal in the field and leaving the remaining unwanted parts of the carcass in place to avoid potentially spreading CWD
• Decontaminate your utensils by soaking in a bleach solution (minimum of 2% or about 2 tablespoons of bleach for every 1 L of water). Then clean with hot, soapy water.

The first line of defense in preventing the spread of CWD into Manitoba is through monitoring. Hunters play an extremely important role in this. Effective monitoring relies on the submission of samples of white-tail deer and elk by hunters. In some areas of the province (e.g., in most GHAs along the Manitoba/Saskatchewan border), submission of samples for CWD is MANDATORY. In other GHAs, especially near the US/Manitoba border, the Province of Manitoba is requesting that hunters submit samples on a voluntary basis. As the list of GHAs with mandatory and voluntary sample submission is subject to change periodically, please consult the Annual Hunting Guide for up-to-date information.

SUBMISSION OF SAMPLES FOR CWD

Unlike testing for Bovine Tuberculosis (TB), here are currently no live tests (e.g., a blood test) for CWD. A sample from a dead deer or elk is required. Researchers in North America are currently working on a live testing method, but this is still in the development stages.

To submit a sample for CWD, hunters are asked to drop off the head, with the upper part of the neck attached, to the closest drop-off depot within 48 hours of the kill. If you cannot drop off your sample within 48 hours, you can freeze the head/neck and bring it to the drop-off depot frozen. A list of drop-off depots can be found in the Annual Hunting Guide and also on the Sustainable Development website (www.manitoba.ca/sd/widlife/hunting/notice/health.html#depot). Your contact information, as well as location of the harvest need to be provided with your sample. Heads will be returned to the hunter upon request.

For MWF Affiliate Clubs who host head scoring nights, you are encouraged to contact the Manitoba Sustainable Development Big Game Health Program (tel. 204-622-2474) well in advance of the event, as it may be possible to have Sustainable Development staff attend and collect CWD samples right at your event. This would greatly assist to increase the number of samples for CWD, and also eliminate the need for some hunters to submit their samples to drop-off depots.

Please be aware that it can take several months for sample results to become available.

Monitoring for CWD has been on-going in Manitoba since 1997. Almost 15,000 deer and elk have been tested since then – ALL NEGATIVE. This is great news, but we must remain vigilant, as CWD has been detected in Saskatchewan, very close to the provincial border with Manitoba.

FURTHER EFFORTS TO KEEP CWD OUT OF MANITOBA

Manitoba Sustainable Development has several regulations in place to help keep Manitoba a CWD-free province. These include:

• The import into Manitoba of live native and exotic cervid species is prohibited
• It is illegal to bring into Manitoba a cervid that has been killed in another province or state without first removing the head, hide, hooves, mammary glands, entrails, internal organs and spinal column. There are specific conditions that must be met for the transport of raw hides and capes that have been detached from the carcass, as well as antlers. Consult the Manitoba Sustainable Development website for details.
• The possession of scents and other substances that contain urine, feces, saliva or scent glands of cervids is illegal
• Feeding and attracting cervids in the Bovine TB and CWD Surveillance Zones is prohibited. Baiting cervids for the purpose of hunting is illegal in all of Manitoba

Education, compliance and monitoring are our best lines of defense against keeping CWD out of Manitoba. MWF encourages you to continue the proud tradition of hunting, while taking every reasonable precaution.